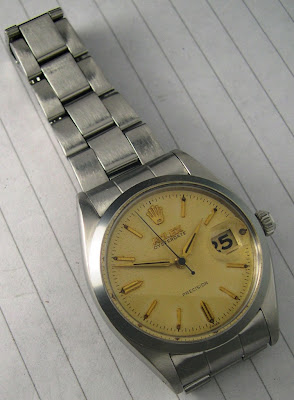 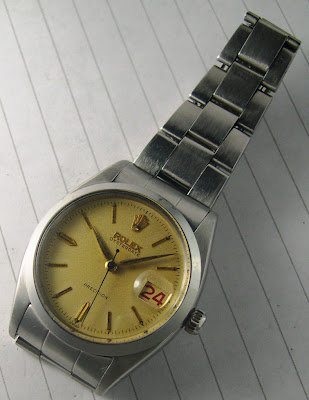 This Rolex 6494 used to by my Dad's daily (beater) watch. He bought it in brand new condition back in early 1960s and since he was only interested in the watch, he could not care much about its box, certificate and accesories. (He only came to know that it should come with box, certificate etc after I asked him).
My Dad had been wearing his Rolex 6494 from the day it was bought till late 1980s. I still recall that he used to handwind this watch every morning before he left for the store.
Sometimes in mid 1980s, my elder brother took it for overhaul to the authorized Rolex Service Centre. At that time, none of our family were passionate about watches. So when it was returned from the service centre in the polished condition with some of the bracelet links were "removed" due to its corrosion, none of us complained. I wish that either my brother and me would have been "educated" enough to tell the service centre to not polish the case and to return the "corroded" bracelet links.
My Dad continued wearing his 6494 several years after the service and completely kept it in the drawer in the late 1980s. He might forget it but his son can't :-)
In the yr 2005, I asked my Dad if I may have his 6494 and he immediately gave it to me. I was so happy (and am still) that I was trusted to take care one of his valuable belongings. And I decided to give the watch the overhaul at the Rolex Service Centre. When I brought it to the front desk for inspection prior to service, I insisted the officer to put note on the order form that I did not want the refinish/polish for the watch.
And they did not polish the watch ... I was happy ;-)
Now, I will let the pictures speak.
Posted by Kucimo at 12:32 AM